The Incredible Story Of Newbigging’s Flag

I have just spent the last two weeks buried deep in Singapore WWII history, preparing for my first museum docent tour at the Former Ford Factory (FFF). While I know quite a lot about my country’s war history, I still had to be thorough with details, in order to handle any questions that come my way.

Not only does the FFF museum focus solely on our war time past, it is also the very spot that Singapore surrendered to the Japanese on 15 Feb 1942, marking “the worst disaster and largest capitulation in British history” – to borrow the words of Winston Churchill. So many visitors who come are Commonwealth war veterans, their relatives, and war history enthusiasts, and they probably know way more about the history than I do. As such, I have not studied so hard or pored over so much historical detail, or underlined so many textbook sentences since I took my A levels a lifetime ago. I am pleased to say I have since become respectably knowledgeable about the topic, beyond just the bits I am personally interested in.

But history is always fascinating. It is the ‘continuum of history’ that excites me. It is knowing that one can walk on a piece of ground and know that ages ago, certain things happened at that very spot to people who were no different from you and me – just that circumstances forced their lives down a different path, sometimes with no return. In the case of war history, knowing what those ordinary people endured, suffered and sacrificed is incredibly humbling. And that is how I always feel when I meander up the driveway of the FFF in Bukit Timah, and walk through the original doors dating back to the 1940s, following in the footsteps of Arthur Percival when he took that fateful journey 78 years ago to surrender the “Gibraltar of the East” to the invading Japanese army.

As for me, I walk up the same path almost 8 decades after him, and into the same building. But it is under very different circumstances, and for vastly different purposes. For me, it is to scrutinize and familiarise myself with all the exhibits that remember those days, to prep for a good tour. I drive there in my cheerful yellow car, having just had a nice lunch with a friend. When Percival took that same route decades ago, it was to face a nasty enemy with the burden of responsibility and humiliation on his shoulders. For after his surrender, over 120,000 POWs were incarcerated in goals around Singapore for the next three and a half years. Thousands were later to die on the Death Railway and the Sandakan Death March. This very physical connection to history – the doors, the building, the driveway, the ghost of his footfall — never fails to make me immensely grateful for what we have today, but it also drives me to share the stories with those who do not know – and horrifyingly, many who should don’t.

But there’s a good story to this. (And indeed, there are many other amazing stories from the war which I have further plans for.) Here is a famous picture of Lt General Arthur Percival (extreme right) walking up the driveway of the Ford Factory on the day of the surrender. He is accompanied by Brigadier Cyril Wild who is carrying the white flag, and Brigadier T. Newbigging who is carrying the British Flag. 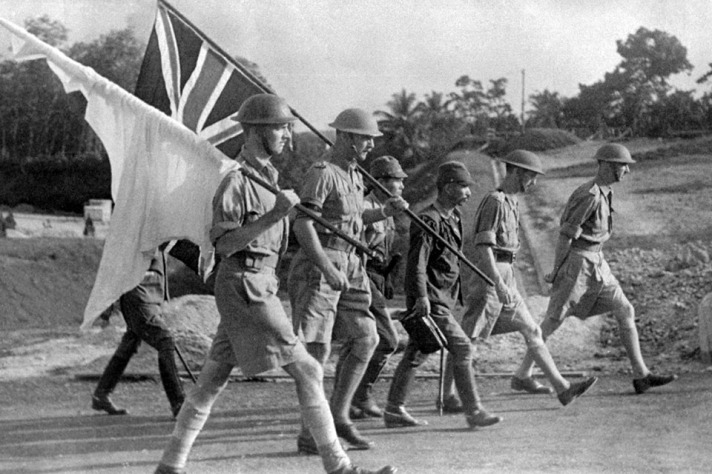 Soon after the surrender, the Japanese demanded that they hand over the British flag. But quick-thinking Newbigging said he had since burnt it. Satisfied, the Japanese did not pursue it further. Unbeknownst to them, Newbigging however managed to hide it within the POW camp where he was imprisoned for the entire duration of the Japanese Occupation. How he did it, and what atrocities he risked if he had been found out, just boggles the mind. But when pushed, people do incredible things – something which the war inspires time and time again. 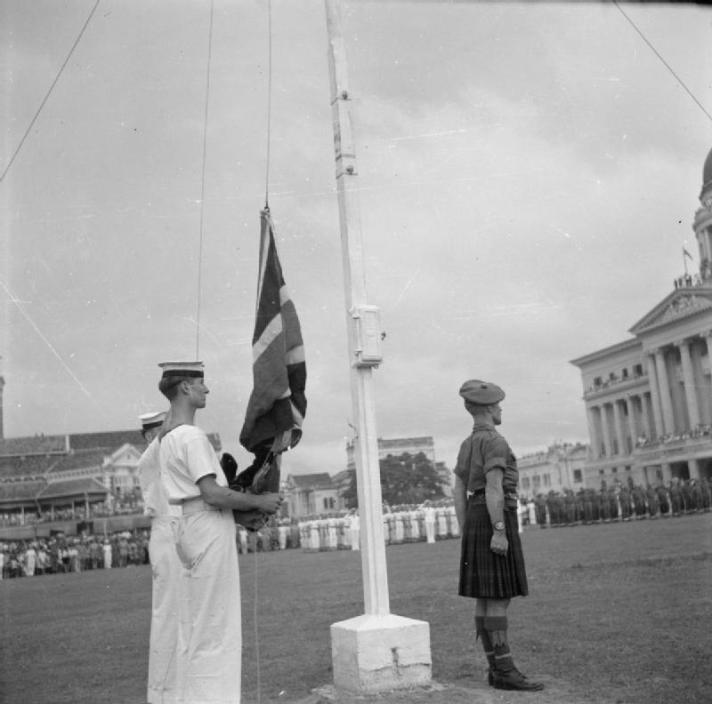 When Japan surrendered in 1945 and the POWs were finally freed, he whipped out the flag from its hiding place. A few weeks later at the Japanese surrender ceremony in the Municipal Building (now our National Gallery) on 12 September, that very flag was flown over the Padang in triumph. For the surrendering Japanese military then, it was no doubt a reminder that karma can be a bitch.

The flag is now hanging in the Imperial War Museum in London. When I visited the city last year, I just had to see it for myself. As much as I detest colonialism, that particular flag to me is a symbol of incredible courage. What struck me too when I saw it was how enormous it really was. And that just makes me wonder all over again how Newbigging pulled it off. 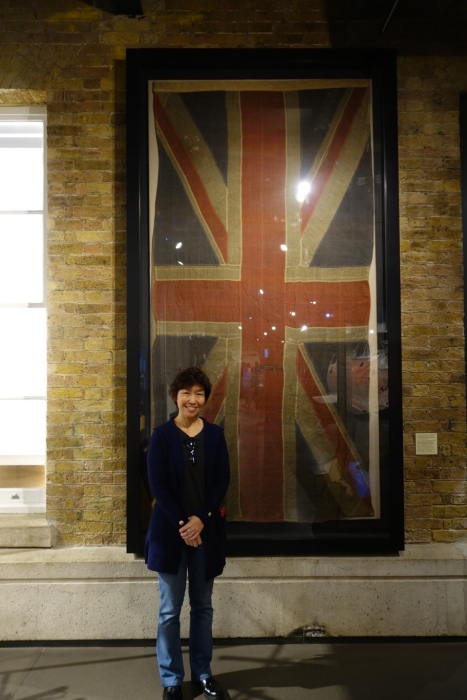 This is just one story from countless others from the war. Whenever I give author talks at schools about my book ‘The House on Silat Road’ which is set in WWII Singapore, I often remind the kids that the elderly people they encounter were once young too. And many could be wartime survivors, who were tougher and more badass when they were young than we could ever be.