A Fancy Pie Shop in London

The day had finally come when we brought the daughter off to London to pursue her university degree. While our universities in Singapore are excellent, the course she chose was not available here. Having studied in a UK university myself, I particularly wanted her to experience life abroad too to widen her horizons. It did a wealth of good for me growing up, and I’m sure it would do the same for her – but with lots more fun than my three years in the grim northern city of Hull.

So the husband and I—loving beasts of burden—helped her heave her substantial suitcases across half the world and into her new residence in Bloomsbury. Once done, it worked up an appetite and we needed a good lunch and some gin. I had made a booking at the Holborn Dining Room (252 High Holborn, London, United Kingdom WC1V 7EN) which was described on the internet as a ‘pie shop’ located in the Rosewood London hotel. The pictures showed it to be a very elegant pie shop and we felt it would do, being just one tube station away at Holborn Station.

The Holborn Dining Room, to the left of the Rosewood’s entryway, was lovely indeed, boasting the city’s largest gin bar which pleased us greatly, and attentive, friendly staff dressed in loud checkered trousers. Nothing that one would expect of a pie shop. Within its sumptuous, wood-panelled, high ceilinged interiors, earnest corporate-types engaged in serious discussion formed the bulk of the clientele, though I spied a smattering of elegant families with high-class babies and a handful of tourists. 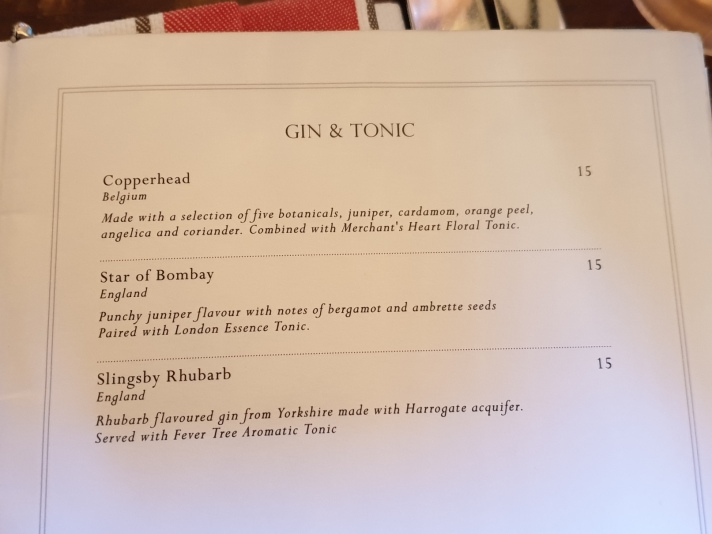 First up of course, was the midday gin. There was a suitable range of G&Ts, from which the Slingsby Rhubarb (£15) with Fever Tree tonic came highly recommended. It was lightly sweet, refreshing with just a nice gin buzz and bitterness from the tonic. The vesper martini was perfectly executed, but the daughter’s aperol spritz was a little dilute.

The menu is traditional British with a contemporary treatment, and the focus was indeed, on pies. For starters, the award winning scotch eggs (£10) was straightforward and beautifully done—tender, juicy meat encasing a soft, runny-yolked, still-warm-but-misshapen egg. The pea soup (£9) was rich, full of fresh intense flavours while the oysters (£20) were excellent, briny and fresh. So far so good.

Then came the mains. The chicken girolle tarragon pie (£22) surrounded by a moat of (more) peas was lovely, nicely encased in a crisp pie crust which gave a lovely, light bite. As for the steak and kidney pudding (£22)—I failed to notice it was pudding, not pie—it was unfortunately one of the stodgiest meals I have had in decades. While the beef filling was really very enjoyable, with meaty, savoury caramelised flavours all nicely melded together, the soft, glutinous, heavy, congealed, homogeneous ‘shell’ that held it together just weighed my stomach down for the rest of the day like a heap of undigested bubble tea pearls. It was just not my thing at all. It would have been infinitely better if it was a pie, with the contrast of crisp crunchy crust (yes, the urgent alliteration is real) as a counterpoint, but I could only enjoy the filling and wash it down with the ample serving of my Slingsby Rhubarb.

I felt I deserved another cocktail and perhaps even a dessert, having bravely waded through the pudding. But sadly it left no space for a sweet, and we rolled out of the Holborn Dining Room stuffed but not fully satisfied. I made the mental note that if I were to pop back in future, I just might try the other enticing items on the menu like a classic pork pie with bacon, fennel and sage; fish finger sandwich with (more) crushed peas, smoked haddock with poached egg, and classic Dover sole. Then again, I personally didn’t think this very posh pie shop offered good value compared to some of the other fabulous restaurants around London. Then again, I might be singing a different song if I had ordered something else instead of the steak and kidney pudding. Then I am sure all will be well.

2 thoughts on “A Fancy Pie Shop in London”

Leave a Reply to The Runaway Palate Cancel reply