When I was in Hanoi not long ago, being the history nerd, I had Building D67 on my must-see list. Purpose-built in 1967, it was where the North Vietnamese generals based their headquarters during the Vietnam War (or the American War, as the Vietnamese call it). Among them was the great General Vo Nguyen Giap, who was most famous for roundly defeating the French at Dien Bien Phu.

Building D67 is located in the The Imperial Citadel of Thang Long in the centre of Hanoi. Dating back over a thousand years, it was essentially the imperial capital until 1810 when it was moved to Hue.

When we first arrived, the large open field in front of the ancient gateway was crowded with students having the graduation photos taken. It was the most popular photo background by far, and we had to weave our way past great groups of them to get into the main complex. I’m afraid the yellow, colonial style buildings which were still standing as part of the palace were rather underwhelming, and the lack of English labelling left us largely clueless about what they were. (Hence, no pics of those in this post.)

The building we were looking for was located towards the back the grounds. The further we walked away from the main gateway, the quieter it got as most visitors did not seem to venture that far. Past the admin offices, another grand though somewhat forlorn yellow building and a pomelo garden, and there it was — a plain, nondescript, green-coloured house of little beauty. Building D67.

But its simplicity belied its real purpose, and it was built with war foremost in mind. The walls of this building are 60 cm thick, its flat roof has three layers to it, lined with sand to protect it from shrapnel, and the main entrance and windows comprises two layers, the outer one made of 1cm-thick steel. Inside, the furniture and objects from the time were all preserved. Dominating the ground floor of the house was the war room — a large green room with a wooden conference table where the generals sat, planned and strategised. Where each general sat were properly labelled.

Two offices sat on each side of the conference room, one of which belonged to Vo. What struck me was the austere wooden bed in the corner with just a straw mat, under a well fortified window. Just a hint, I thought, of how stoic, tough and resilient these men were. They walked the talk.

What was most exciting was the underground bunker that lay about two stories below, past thick steel vaulted doors and down a steep staircase.

There was an almost exact replica of the war room upstairs, just narrower, enclosed by super thick walls. 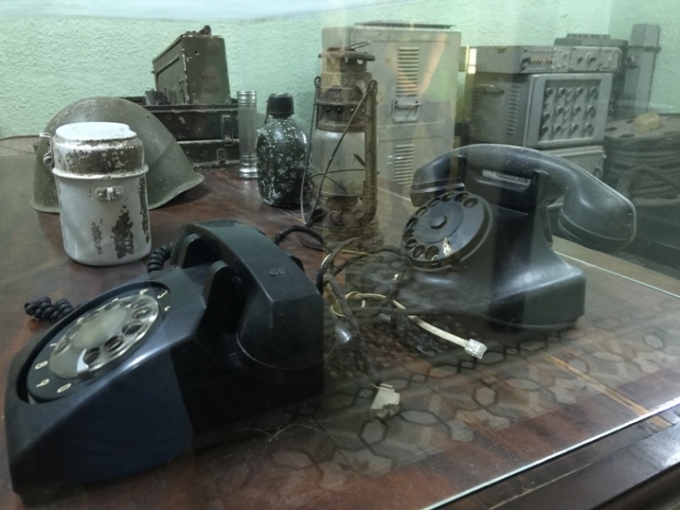 Lots of the effects from the time are on display, from old phones and radios to medical kits. Apparently this bunker leads to a network of other tunnels, but only a few rooms are open to the public.

For those keen on history, this place is a definite must-see. While the rest of the grounds did not excite me, it’s worth noting that a huge archaeological dig is underway nearby where they are unearthing lots of the ancient palace.

Meanwhile, don’t forget to snap a shot in front of the gateway once the students have had their turn. It’s one of those iconic holiday shots you need to do.